This remarkable Gold Anchor potpourri vase & cover illustrates perfectly the flamboyant nature of Chelsea’s products at the height of the Gold Anchor period (1756-69). It is the very spirit of the Rococo movement, with its sinuous handles and lavish golden exotic birds.

The term ‘Dudley Vase’ arose due to the famous garniture of Chelsea Gold Anchor Vases formerly the property of the 1st Earl of Dudley and at one time residing at his lavish country house, Witley Court, in Worcestershire. The vases were sold by the Earl in 1884 for the princely sum of £20,000 – for this price he got seven specimens, which are now thought to be three pairs and a centrepiece, which have been grouped together into an ‘extended family’. One of the pairs is of the same form as this example.

The design is very much influenced by French taste, namely the products of Vincennes-Sevres in relation to the mazarin blue ground and the richly detailed gilding, and even French ormolu when considering the flamboyant handles and pierced neck.

This handle is soooo Rococo!

The pierced neck of the potpourri

However, the seven years war (1756-63) would have meant limited direct contact or copying: rather, the Chelsea product is an Anglicised idea of French taste. Distinctly Chelsea are the more robust feet, and the body shape (referred to rather unflatteringly in the literature as an upside-down pear shape) is also a little top-heavy to be French. 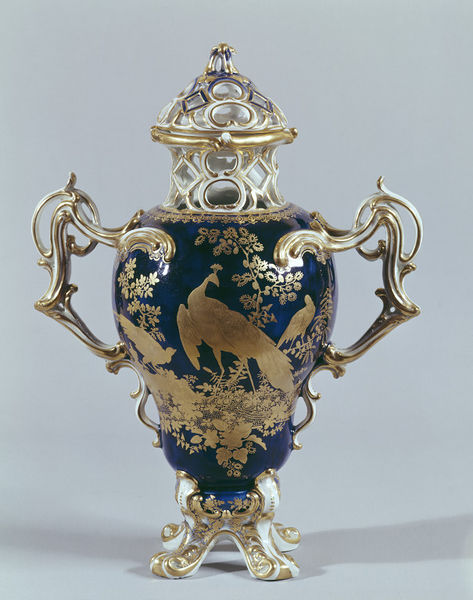 One of a pair in the Victoria & Albert, South Kensington

There are a pair of identical vases in the Victoria & Albert Museum, South Kensington (although confusingly only one is documented on the website!). These have the same composition of birds in the same hand on one side, with the other offering a detailed chinoiserie scene. This pair we a part of the Jones Collection, and have the distinction of having later replacement (bone china) lids.

An even more interesting pair can be seen in the Lady Ludlow collection, in the Bowes Museum (#101 in the 2007 publication). This pair looks similar, with mazarin blue ground, having flowers & figures as the decoration – but there is a difference between the two vases, and it appears one is a later copy! Probably made to keep a single vase company, it is a 19th century re-creation of the Chelsea, and very well done.

The Lady Ludlow Collection catalogue – a superb large publication on English (& some other) Porcelain.

However, there are several signs that make it stand out as a copy: the body is a subtly different shape, the moulding to the feet and handles a little thicker and the glaze has a blueish tinge. The gilding is remarkable, and a very close clone of the original splendidly-rich Chelsea workmanship. It was a very skilful ‘imitator’ – faker? – who created vase ‘B in the Ludlow Collection, and it was with some trepidation that I applied the excellent comparison criteria outlined in the excellent catalogue (written by Patricia Begg, of the Ceramic & Glass Circle of Australia). What a relief that our vase shares none of the characteristics of vase B – the copy – but rather has the right aspects to be catalogues as Gold Anchor Chelsea.

The mark on this vase is very much like the ‘fish hook’ signature in the cartoons of the famous Australian cartoonist, Jeff Hook: hidden in plain sight, almost a part of the decoration unless you go hunting for it. While rather large, it is in keeping with other marks on major pieces of the Gold Anchor period. On almost any other piece, such a big bold mark would set off the alarm bells, as it was a favourite trick of fraudsters in later centuries to use such a mark. However, this vase has every indication it should have of authenticity, despite its grand mark. Obviously, the artist was extremely proud of his handiwork, and it warranted a mark to match.

Who the artist was is unfortunately not yet known, but his hand can be traced across a series of wares decorated with exotic birds from this period. Mazarin Blue ground was the most popular, but also a deep claret described as ‘crimson’ in the factory records. The gilt decoration is piled on thickly, and has at times had more than one application due to bubbling and bald patches; when satisfied with the gilt silhouette, the artist has taken a tool such as a garnet on a short stick, and used it to incise the details of the fancy birds, and the trees and flowers they perch amongst.

Some vases forms date to the beginning of the Gold Anchor period, 1758. However, there exists a magnificent painting of Nicholas Sprimont, proprietor of the Chelsea factory, seated surrounded by large scale vases, his wife, and his sister-in-law. A date of circa 1758-62 is attached to this work, and as the vases depicted do not contain any of these elaborate Dudley-type vases, it is assumed they came shortly after, in the mid-1760’s. There is a story of the original provenance of the Dudley vases that may well provide a closer date; they were recorded by the ceramics historian William King to have apparently been purchased by George III as a presentation for Lady Cope, perhaps on occasion of her marriage in 1767.

Our superb example of a Dudley Vase will be offered as a part of our 2014 Recent Acquisitions Exhibition, to be held in our Geelong premises, opening 12th April.

This blog is maintained by Moorabool Antique Galleries, Australia, and contains highlights of their stock. Click above to visit their site - they are ceramics specialists, with over 7,000 items for sale....